Share :
An easy way to make vegetable bakwan, vegetable ote ote and tasty and crispy reinforcements using simple bakwan recipe without eggs. Fried food made from the main ingredient of wheat flour mixed with vegetables and even shrimp is often found in various regions in Indonesia, so it is not surprising that the mention of its name is also different, in addition to vegetable bakote, ote-ote and bala-bala are also called weci, heci, kandoang, pia pia and so forth. 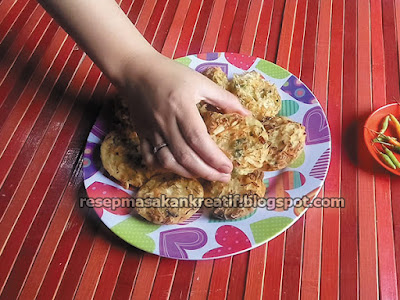 Bakwan is more delicious to be served hot, snacked with cayenne or chili or eaten with rice. Savory simple Bakwan this time is made using flour (blue triangle), mixed with enough rice flour so that the bakwan becomes more crispy.

If the plagues generally have a random or messy form, bakwan and otote are usually round or bright in the moon. We can use vegetable sprigs to print them, but don’t use too thick ones so that they are easily removed or not sticky in the mold. The more hot the oil is evenly distributed, the dough will be faster and easier to escape, but just use a rather small fire so it does not burn.

How to make Bakwan Vegetables: