Share :
The following cilok sauce recipe consists of how to make a soft, supple cilok pentol along with a tasty and spicy cilok broth recipe even from simple dough and ingredients. Cilok goang is a typical peanut snack that is very popular from Tasikmalaya, Garut to Bandung. 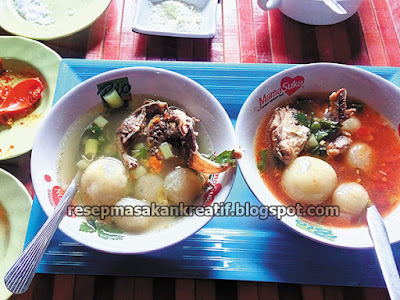 The savory broth comes from a decoction of chicken bones which can also be combined with claws or chicken feet.

The cilok cassava sword certainly has its own secrets, both the ingredients of the cilok pentol seasoning ingredients and the soup for sale. Some of them are the comparison of flour and seasoning quantities, the use of onion oil, even variations of chili sauce that we can see in the recipe below or we can see it in more detail in this video.

How to make Cilok Sauce:

Serving Suggestions: Prepare a serving bowl, add salt, powdered broth, pepper according to taste, pour enough onion oil, then pour the broth with the bones and add the hot cilok bulb from the steamer. Finally, add the chili sauce according to spicy taste, peek the spicy raos pisan sauce is ready to eat.

5 Benefits of Red and Green Apples for the Sick